Godfrey Torto will be joining our annual ‘Get ahead in law’ seminar on Saturday 29th June at Birkbeck, University of London. 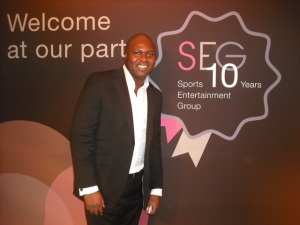 Godfrey K Torto, the PR Man and Football Agent, has worked with some of the biggest names in football; Frank Lampard and Carlton Cole to name a few.

  Other clubs included Kingstonian FC where he was a semi-professional at this point, Harrow Borough FC and Hayes & Yeading FC which was his last club at the age of 27. o Supported the ABC Ball for SOS Children’s Charity, December 2010 organised by the wives and partners of Cesc Fabregas, Robin Van Persie and Thomas Vermaelen. Godfrey organised many of the auction prizes including a Gold plated iPod autographed by Cesc, Robin and Thomas.

o Collaborated with HMP & YOI Reading on the ‘Celebrating Success’ event in November 2011. Godfrey brought in ex-player and BBC pundit Mark Bright, and also one of his aspiring Reading FC players, Charlie Losasso. This event was in recognition of the young offenders achieving their Princes Trust Awards where Godfrey and Mark delivered inspirational speeches.