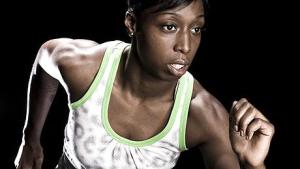 Jeanette will be joining our ‘Succeeding in the Media and Building Your Enterprise’ workshop at the Stephen Lawrence Charitable Trust on Tuesday 30 October from 2-5pm. Under 25′s welcome – click here for full line up and to register for tickets.

Born and raised in East London, Olympian and track and field runner Jeanette Kwakye began running for her local club Woodford Green with Essex Ladies in 1996. She soon realised her potential and worked her way through the junior ranks and competed for Team GB in her first major junior international in 2002, where she earned a Bronze medal for the 4x100m relay.

Graduating in 2005 after studying Politics and Economics, Jeanette focused all her efforts on training towards the 2008 Olympic games.In that year she won a silver medal at the World indoor championships and broke the 23-year-old 60m British record over 60m.

Jeanette also qualified for the Beijing Olympics by retaining her British 100m outdoor title. She went to become the first British woman in 24 years to make the 100m final in Beijing, where she placed 6th.

Although not able to compete in the 2012 Olympics due to an earlier injury, Jeanette was still heavily involved working for media channels and radio stations throughout the games.  Away from the track, Jeanette has also branched out into film, she worked on two cinema releases in 2012. Fast Girls and Personal Best, the latter in which she starred. Jeanette has also been involved for international campaigns for Adidas, Red Bull, Nike and Proctor and Gamble. She is also endorsed by BMW UK.

Alongside her training she is a committed athlete mentor, working with the Youth Sport Trust, Sky Sports and the Dame Kelly Holmes trust.