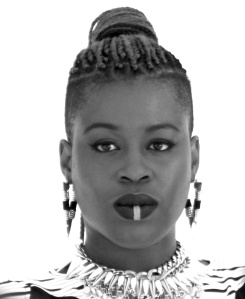 Hackney-born soul siren ShezAr is an exciting new force in the UK music scene. From co-writing and delivering the album ‘Sonny Boy’ with Unsigned MOBO-winner Frequently Asked Questions, to collaborating on ‘Curtain Call’ with Sony Music-signed Aiden Grimshaw, she has very quickly became a collaborator of choice for established artists and emerging stars.

With a family steeped in a deep musical tradition, it was ShezAr’s older brother and renowned UK drummer MckNasty who introduced her to the industry as a session singer. It wasn’t long before the likes of Natasha Beddingfield, Terri Walker, Bashy, Omar, MPHO and The Guillemots were seeking out the promising singer ‘with the big voice’ for backing vocal duties

Raised on gospel music, ShezAr’s soul-music streak runs through all of the genres she dabbles in – House to Motown and Blues. The ability to deliver powerful vocals for all occasional has been a major selling point for this adaptable artist. As the UK prepared to receive the Olympic torch, ShezAr was invited to perform on the BBC Introducing stage at the Radio 1 Hackney Weekender and went on to take part in two national tours with chart-topping lyricist Wretch 32 (perform alongside Ed Sheeran, Delilah, Chipmunk and Angel). ShezAr ended 2012 on a well deserved high note, with an interview on Channel 4 music-based breakfast show Freshly Squeezed “Ones To Watch – 2013” and a significant industry buzz.

Counting one of the UK’s most prolific artist/producers of the moment, Labrinth, as your younger brother, couldn’t hurt chances of further recognition. Her collaboration with the musical maestro on his recent ‘Atomic EP’ set the scene for the siblings to continue to create new exciting material in 2013.

With firm foundations laid down, ShezAr began her independent journey in earnest with the premier of her first music video ‘Forever’, featuring another uber talented sibling, the Sony ATV signed Mac1. The track receiving strong YouTube support and multiple plays on 1Xtra, Capital XTRA and RinseFM.

Since then, ShezAr has been a regular guest on Naughty Boy’s Hotel Cabana-themed live show for the 2013 summer festivals, she has won- over live crowds and introduced acts such as J Spades, Sam Smith & Emeli Sande and stepped up to perform additional summer live dates with Wretch32. With the promise of more shows in the 2014, as part of a UK tour performing alongside Jacob Banks and Shakka, it’s clear that ShezAr knows her way around the main stage.

Whether wowing the likes of Fearne Cotton & Trevor Nelson, with her rendition of ‘Lifted’ at BBC 1Xtra’s Live Lounge, performing at the prestigious iTunes Festival and BBC’s 1Xtra Live Concert or celebrated the 50th anniversary of Martin Luther King’s inspirational speech, as part of a specially commissioned We Live The Dream UK Tour, ShezAr’s star is clearly in ascendance.

Vocals cameos at the MOBO Awards, Virgin Records 40th Anniversary and the Hotel Cabana UK Tour are an indication of ShezAr’s calibre, as she prepares to take flight as a solo performer.

However, alongside her professional aspirations, ShezAr is passionate about educating and nurturing emerging talent. A seasoned vocal coach of many years standing, she joined the Industry In The Streets team as lead vocal tutor for Capital XTRA’s Music Potential 2012 programme, in turn helping a collective of talented 16-25 year-olds build the skills and confidence to perform at Wembley Arena alongside the likes of Wretch 32, Devin and Angel.

Her participation in Parliament’s Women In Democracy event continues to pave the way for creating positive change. A strong, powerful and highly motivated woman in her own right, ShezAr’s drive to help, encourage and inspire young people to fulfill their dreams led to an event that would make history as the first performance event ever to take place in the House Of Commons’ Portcullis House building.

ShezAr truly is a new soul sister for the 21st Century. Her bold and quirky fashion-sense and style are as notable as her voice. Whether appearing vivacious in color or serene with sophistication, ShezAr is ready to boldly affirm her status as one of the UK’s most exciting new voices with the release of new EP #ShezArsTheName