Ray Paul’s career has seen him work for the BBC for over 20 years before starting his company, the playmaker group.

While at the corporation, he worked for a number of radio stations, most notably running BBC London from 1997-2001. In 2001 he was asked to be part of the initial set up team that started a new digital radio station, 1Xtra. He held the position of Executive Producer of Specialist Music & Live Events for 7 years before moving to Radio 1 and being Head of Weekends in 2009.

the playmaker group is a uniquely creative company who oversee a host of key areas in entertainment under one umbrella group. These areas include Media and Content Production, Event Production & Management, Representation and Consultancy & Training.  They have a strong history & reputation of managing DJs, entertainers and artists on a national and international scale from BBC Radio 1, Capita FM as well as a vast consultancy experience working with various brands, celebrities, creative businesses, media and youth organisations to help facilitate and execute their plans, aims and objectives.

Artist/Marketing/Communications Specialist for Music and Entertainment

What is your background in the entertainment  industry?

Cookie Crew’s career took off after winning a National Rap Competition at The Wag Club in 1985. After winning the competition, this was the beginning of what was to be a very success career.  We went on to do lots of shows in London and around the country and as our reputation started to build we became a prominent and respected fixture on the Hip Hop scene, working with various dj’s and producers. I was a Chef at the Ministry of Defence at the time and my dream was to give up my day job to pursue a career as a recording artist.

In 1986 we met the Beatmasters and was working with them on voiceovers for TV ads.  We began working together and ended up recording ‘Rok Da House’ which became a hit single, followed by a 2nd single ‘Females’.  Both were released on Rhythm Kings Records and opened us up to a more commercial audience and fan base.

In 1988 we went onto sign an international recording contract with London Records (Polygram Worldwide) and also signed a publishing deal with Virgin/EMI.  With this under our belts we were able to fulfill our dreams and go to New York to record with some of our favorite Hip Hop artists (Gangstarr, Blacksheep, Stetsasonic and Davy DMX).  This gave us International exposure and we also worked with the likes’ of Roy Ayres and Edwin Starr.

We delivered several hit singles and had the pleasure of touring with some of the greats during that time: Bobby Brown, Guy, Public Enemy, EPMD to name a few.  We were also doing our own headline tours in the UK and toured extensively around Europe.

When did you change career path?

Around 1994, assisted by The Princes’ Trust, I set-up a promotions company organizing club nights, events and securing event sponsorship deals.  From here I started working at MCA Records and in 1996 went to work for Universal Music.  I went from strength to strength and have had the pleasure of working at some of the best companies in the world, absorbing how the international wheels turn.

Who have you worked with in the music industry?

What are you working on at present?

All my experiences and job opportunities over the years’ have enabled me to set-up on my own company offering a bespoke consultancy service to the music industry (UK & US). My knowledge set the foundations, for me to continue a career within the industry.  Having spent years as a music fan and then a recording artist, I was able to migrate my skills and knowledge over to the other side of the business.

Do you support any charities?

My charitable interests lie with young people and education!

Inspirational YOU – Invest in YOU Media Master Class – 18th April 2012

Invest in YOU – Succeeding in the media master class 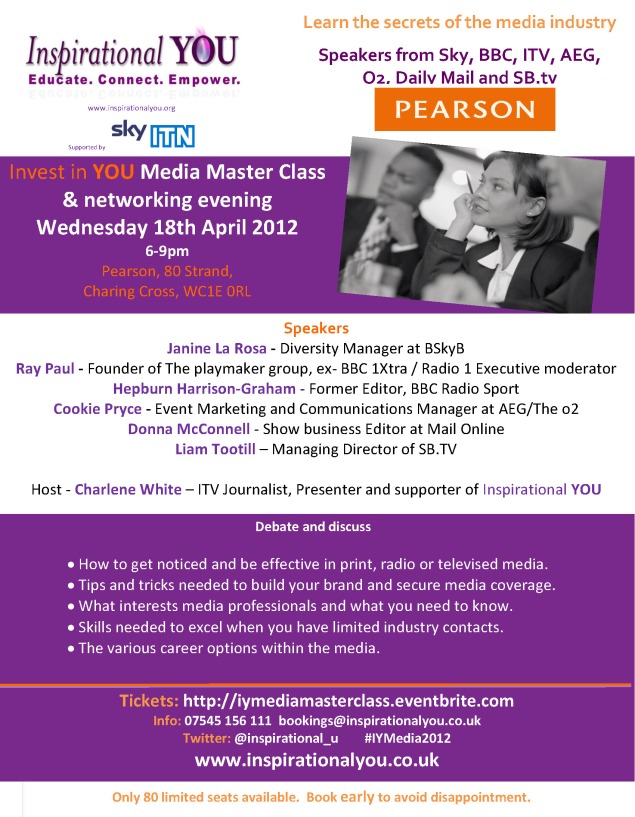 Inspirational YOU presents an evening masterclass featuring five professionals from the world of TV and radio.  Our panellists have ran national radio stations, lead teams of 100’s on news stories across the globe and have worked with A list celebrities throughout the world.  They all started their careers from very humble backgrounds and are now leading the way by influencing what we see and hear via the media.

Charlene White – Journalist and Presenter (Host) & supporter of Inspirational YOU.

This masterclass is ideal for social entrepreneurs, students, business leaders, those in media, events, journalism, marketing, aspiring entrepreneurs or those who want to network and raise their profile.

Learn how you can get ahead in the media.

Inspirational YOU returns on Saturday 31st March, 11am-6pm with another powerful line up of speakers who will inspire, support and give industry tips.

This is a fantastic opportunity for individuals to meet some of the UK’s most influential professionals, academics and leading entrepreneurs.  Speakers come from Tooks Chambers, Old Bailey Chambers, Guardian, ITV, Ernst and Young, The Voice, CNN, The Mirror, Deloitte and PwC.

Tickets to the event are limited at £5.00 and are free to University of London students.

Inspirational YOU – This Saturday 31st March at Birkbeck, University of London

What are you doing on March 31st that will give you access to a range of highly talented professionals  who are willing to share their key areas and pointers from their career success with you?

Nothing! Well you can come along to the first 2012 Inspirational you where you’ll have just that.

A fantastic opportunity for you to meet some of the UK’s most influential professionals, academics and leading entrepreneurs.  Speakers come from Tooks Chamber’s, Old Bailey Chamber’s, The Guardian, ITV, Ernst and Young, The Voice, CNN, The Mirror, Deloitte and PwC.

Invite you to attend the film première of their short films: 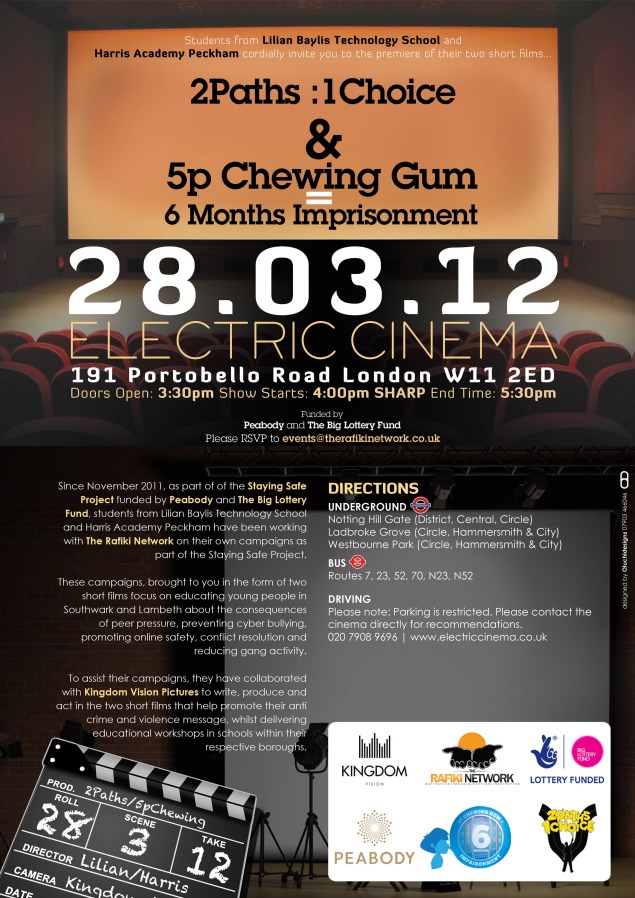 Since November 2011, as part of the Staying Safe Project funded by Peabody and The Big Lottery Fund, students from Lilian Baylis Technology School and Harris Academy
Peckham have been working with The Rafiki Network on their own campaigns as part of the Staying Safe Project.
.
To assist their campaigns, they have collaborated with Kingdom Vision Pictures to write, produce and act in the two short films that help promote their anti crime and
violence message, whilst delivering educational workshops in schools within their respective boroughs.

University of London, Torrington Square, London, WC1E 7HX
Following the success of Inspirational YOU’s last event at the UK Supreme Court, they have returned with a line-up of world class professionals from a wide array of industries that will inspire and motivate attendees.
Taking place at the vibrant Birkbeck University in the centre of London, this is a fantastic opportunity to meet some of the UK’s most influential professionals and leading entrepreneurs.

There will be over 30 speakers spread over 12 seminars from leading corporations such as the Guardian, ITV, Ernst and Young, BBC, Sky,The Voice, CNN, The Mirror, Deloitte and PwC.

This day is ideal for Social Entrepreneurs, students, graduates, business leaders, those in Law, Art, Emerging markets, Science, Journalism, Marketing, Media, Sport, leadership, aspiring entrepreneurs or those who want to be empowered.

Limited £5.00 tickets and FREE to University of London students.

Inspirational YOU supported by Birkbeck returns for our first conference of 2012.

We have another stellar line up of speakers who will inspire and motivate you throughout the day.

This is an exciting and exclusive occasion for participants to be coached by some of Britain’s top speakers, and leading entrepreneurs from the Guardian, ITV, Ernst and Young, CNN, The Mirror, Deloitte and PwC.

This day is ideal for Social Entrepreneurs, students, graduates, business leaders, those in Law, Art, Emerging markets, Science, Journalism, Marketing, Media, Sport, leadership, aspiring entrepreneurs or those who want to be supported.

The ART of being black (History of art seminar)

There is a business in everyone

The Business of Sport

YOUr impact in the media

Meet and hear from media professionals who will give tips and insights into the industry.

Learn how to influence and rise to the top.

I am young and I am winning

The power and influence of Science

£5.00 to those not studying at University of London.

Please note that you can not book more than 3 workshops.

Details
Premiered at the 2011 Sundance Film Festival, Miss Representation is written and directed by Jennifer Siebel Newsom and exposes how mainstream media contribute to the under-representation of women in positions of power and influence. The film challenges the media‘s limited and often disparaging portrayals of women and girls, which make it difficult for women to achieve leadership positions and for the average woman to feel powerful herself. View the trailer here.

Join us for a screening (film starts at 6:30pm) followed by a discussion (lead by Tarynn Hillier and Kate McGurk) about the themes raised in the film, and participate in our video testimonials. Spread the message that more women belong in leadership roles, that the media should make changes to the stereotypes and biases it purports regarding women and that their needs to be more positive female role models across the board in media so that young women can aspire to become what they grow up watching. The tag line of the film is “You can’t be what you can’t see”!

Each of the WGIRLS chapters is united under the mission to provide underprivileged women and children with the support and resources necessary to achieve health, happiness, and the ability to lead productive and successful adult lives.

WGIRLS chapters host several fundraising events throughout the year. Proceeds support customized WGIRLS programming within the local community and/or are donated to local, pre-selected, non-profit organizations that share our vision to support underprivileged women and children.

In addition to fundraising, the WGIRLS volunteer, and have implemented customized programming to meet several outstanding needs in the community. Programs include Declutter and Give Back! which provide women fleeing domestic violence with everyday essentials.

The WGIRLS welcome new volunteers who are interested in joining the London chapter.