Artist/Marketing/Communications Specialist for Music and Entertainment

What is your background in the entertainment  industry?

Cookie Crew’s career took off after winning a National Rap Competition at The Wag Club in 1985. After winning the competition, this was the beginning of what was to be a very success career.  We went on to do lots of shows in London and around the country and as our reputation started to build we became a prominent and respected fixture on the Hip Hop scene, working with various dj’s and producers. I was a Chef at the Ministry of Defence at the time and my dream was to give up my day job to pursue a career as a recording artist.

In 1986 we met the Beatmasters and was working with them on voiceovers for TV ads.  We began working together and ended up recording ‘Rok Da House’ which became a hit single, followed by a 2nd single ‘Females’.  Both were released on Rhythm Kings Records and opened us up to a more commercial audience and fan base. 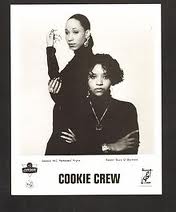 In 1988 we went onto sign an international recording contract with London Records (Polygram Worldwide) and also signed a publishing deal with Virgin/EMI.  With this under our belts we were able to fulfill our dreams and go to New York to record with some of our favorite Hip Hop artists (Gangstarr, Blacksheep, Stetsasonic and Davy DMX).  This gave us International exposure and we also worked with the likes’ of Roy Ayres and Edwin Starr.

We delivered several hit singles and had the pleasure of touring with some of the greats during that time: Bobby Brown, Guy, Public Enemy, EPMD to name a few.  We were also doing our own headline tours in the UK and toured extensively around Europe.

When did you change career path?

Around 1994, assisted by The Princes’ Trust, I set-up a promotions company organizing club nights, events and securing event sponsorship deals.  From here I started working at MCA Records and in 1996 went to work for Universal Music.  I went from strength to strength and have had the pleasure of working at some of the best companies in the world, absorbing how the international wheels turn.

Who have you worked with in the music industry?

What are you working on at present?

All my experiences and job opportunities over the years’ have enabled me to set-up on my own company offering a bespoke consultancy service to the music industry (UK & US). My knowledge set the foundations, for me to continue a career within the industry.  Having spent years as a music fan and then a recording artist, I was able to migrate my skills and knowledge over to the other side of the business.

Do you support any charities?

My charitable interests lie with young people and education!