As a British and Commonwealth Rhythmic Gymnastic champion, Aicha came to dance and choreography in a unique way. She has carried the grace and skill from gymnastics mixed with her Urban London upbringing into her work to create a vast range and interesting fusion of movement and direction. Coupled with her knowledge of style and fashion Aicha doesn’t just concentrate on moves but rather a total conceptual package. 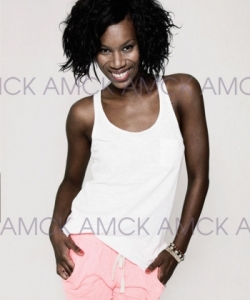 From her career as an international model and dancer working with artists such as Ricky Martin, The Backstreet Boys and Take That ( the first time round!!) Aicha found her talent lay in naturally creating scenes and moves for artists with her first major assignment being that to create the feel of Kanye West Golddigger promotional campaign which culminated in the legendary Brit Awards performance that featured 80 gold covered girls.

Since then Aicha has choreographed some of the UKs most high profile shows and events including the London Olympics 2012 bringing together her sporting and creative successes to her home town. MTV European Music Awards where she was the resident choreographer for many years creating performances for all the artists and hosts of the show from major pop artists like Katie Perry to hip hop royalty Snoop Dogg , The Brit Awards and the Mobos for various artists .

She has had multiple roles as a TV personality and industry expert. Was a judge on MTV reality dance show MTV Shakedown and Sweet Sixteen, Trouble TV’s Bump and Grind , ITV Dancing on ice, Britain’s Next top Model, Extreme Makeover, and recently BBC’s The Best in Town where she presented the show to find the best dance school in town as an undercover investigator.

Not only did she develop her career in Choreography she used the skill to work in fashion. She worked on major fashion shows For 10 seasons she worked exclusively with designer Jasper Conran calling his shows for London Fashion Week as well as in Milan for Dolce Gabanna . More currently her work took her into fashion film with her choreography and movement direction shown by the British Fashion Council and Nick Knights Show Studio . One of the most challenging of these films due to the technicalities and precision of the movement for the medium, was the Christian Louboutin’s 20th Anniversary retrospective hologram film staring Dita Von Teese which premiered at the Design Museum in London.

As artistic director for the L’Oreal Colour Trophy Awards in 2014 she was the executive producer of a series of 6 curated films with leading British filmmakers . Her creative and artistic direction for the brand Redken NYC won a C&IT Industry Award Best Fashion and Beauty Show 2014.

Her knowledge of the dance and fashion industry led her to start her own business with her two agencies AMCK Dance and AMCK Models under the umbrella of AMCK Management. The dance division which celebrates its tenth anniversary this year supplies dancers to the very best music artists worldwide including Pharrell, Beyonce, Madonna and Rihanna . AMCK Models is the first and only high fashion model agency in London that solely represents men and is listed within the top premium mens agencies in the world. The roster boasts top models with campaigns from Armani, Prada, DKNY to Vivienne Westwood. Her agencies have won industry awards and Aicha has been named as one of the top 50 influential black women in the UK today by the Power List.

As an influential speaker, Aicha gives inspirational seminars in both the business sector with young entrepreneurs and secondary education working with young girls. She is a supporter Kids co and Young Minds charities and in the summer of 2014, Aicha was chosen to join a group of 70 of the successful strong women to take part in the Cash & Rocket tour, where she drove across Europe raising awareness and money for 3 African charities Orphan Aid Africa, Sumbandilla and Shine on Sierra Leone.