Manisha Taylor is a trainer, footballer coach and scout and sports journalist.  She will be joining our sports panel to discuss the Business of Sport on Saturday 29th June at Birkbeck, University of London.

By profession Manisha is a Primary school teacher with a BA Education (QTS) from Goldsmiths College, University of London. she has been working in education for over 12 years and since qualifying has attained the National Professional Qualification for headship (NPQH), which qualifies her to become a Headteacher, in addition to a MA in Leadership. Manisha is a former Deputy Headteacher, and presently working part-time as a football coach (left full-time employment last year to complete her Masters degree).

HOW DID YOU GET INTO COACHING:

I started playing football when I was 8 years old (1988), so already had a natural interest within the game.  Coaching gave me the opportunity to utilise the skill set that I had gained in teaching, and knowledge and passion for the game. I love learning and passing on learning, so coaching was a natural progression. 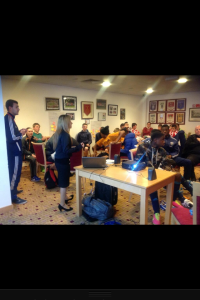 “Manisha is an inspiration to both men and women alike, of all ages and ethnic backgrounds. She had continued to succeed in all aspects of her work within the professional games, despite adversity and circumstance. Breaking and fighting through many barriers, both personal and external – her resilience, determination and mental strength needs to be recognised. An inspirational individual and credit to the game of football” (Bobbie Chahal, Sky’s Soccer AM show)

“Manisha Tailor has been an integral member of the London Football Association Inclusion Advisory Group.  The LFA IAG was set up to represent the diverse community of the capital at Board and council level. The aim is to give under represented groups a voice and a choice on how football is run in London. Manisha joined the group at an important transitional period and helped the group become a standing committee within the London FA structure. Manisha sits on the group and represent multiple groups including Women and girls, people with disabilities and Asians in football. Her experience and knowledge is valuable to the group, for setting up different programmes that are designed to increase participation for BME and under represented groups. Manisha acts as an inspirational role model to young females that want to get involved with football and sport, whether it’s, participation, coaching or an ambassadorial role. As a coach Manisha has so much to offer, and in the current climate where women in coaching roles are so low in comparison to the population, we need the likes of Manisha to change it. If anyone Manisha deserves this award for the work she does in the community and the ambassador she is for women in sport. The columns and blogs that she writes are enlightening and inspirational for all to read and the London FA are very lucky to have her representing us in the community.” (Darren Smith, Football Development Officer at The London FA – Inclusion)

“Manisha is a wonderfully dedicated individual who has a tremendous passion and desire to achieve in football.  She will continue to progress and I have no doubt she will achieve all of her ambitions” (Troy Townsend, Leadership and Mentoring Manager – Kick it Out)

“It is a pleasure to work with Manisha and see her grow in confidence while working in the football coaching environment.  Her coaching style and ethos of allowing children to be taught through guiding them to make their own decisions, and learn through making choices whether right or wrong, has helped to build more confident players who are able to use initiative and have the resilience to think for themselves”.  (Rachel Yankey, Arsenal Ladies/England Women/Team GB)